Arsenal crashed to a second successive Premier League defeat as Ollie Watkins’ early goal fired Aston Villa to a 1-0 win, while nine-man Newcastle held out to beat Southampton on Saturday.

The Gunners fell behind after just 74 seconds at Villa Park and were unable to muster a convincing response.

Arsenal have now lost 10 of their 23 games this season and their hopes of a top-four finish are receding fast as they remain in 10th, nine points adrift of the Champions League places.

Villa, on the other hand, can dream of making the Champions League as they climbed up to eighth, five points off fourth-placed Liverpool with a game in hand to come.

Dean Smith’s side took the lead with their earliest Premier League goal since 2014, aided by some woeful defending from the Gunners.

Arsenal’s Cedric Soares gave the ball away and Bertrand Traore crossed to the unmarked Watkins, whose shot went in via a deflection off Rob Holding.

“We have the quality to score goals in abundance and we showed that today,” said Smith. “I was most pleased with the desire to see the game out at 1-0.”

The closest Mikel Arteta’s men came to a response was a stunning save from former Arsenal ‘keeper Emiliano Martinez to turn Granit Xhaka’s free-kick behind.

“In the Premier League when you give a goal to the opponent — and we gave them another three opportunities to be fair, just giving them to them — and then you are not ruthless in the opponent’s box, you don’t win games,” said a frustrated Arteta.

West Ham remain fifth, but did little to aid their chances of a top-four finish with a 0-0 draw at struggling Fulham.

Scott Parker’s Fulham are still without a win in 12 games, but could easily have shaded a game of few clear-cut chances when Ademola Lookman’s free-kick flew just wide.

However, the result was overshadowed by a controversial refereeing decision by Mike Dean deep into stoppage time when West Ham’s Tomas Soucek was sent-off after a VAR review for an unintentional clash with Aleksandar Mitrovic.

The Cottagers are still eight points adrift of safety after Burnley came from behind to earn a 1-1 draw against Brighton.

Johann Berg Gudmundsson’s equaliser made amends for an earlier mistake when he let Lewis Dunk’s header squeeze past him on the line for Brighton’s opener.

A six-game unbeaten run has allowed Brighton to open up a 10-point gap on the bottom three.

Newcastle also pulled clear of the drop zone with a thrilling 3-2 win at St James’ Park to ease the pressure on beleaguered boss Steve Bruce.

Southampton were thrashed 9-0 by Manchester United in midweek after a second-minute red card for Alexandre Jankewitz.

Ralph Hasenhuttl’s men got off to another nightmare start as Joe Willock, on his Newcastle debut, and Miguel Almiron’s deflected strike put the Magpies 2-0 up inside 26 minutes.

Willock, who joined on loan from Arsenal on transfer deadline day, opened the scoring in a thrilling clash.

Takumi Minamino’s strike in his first appearance for the Saints on loan from Liverpool reduced the deficit before Almiron struck again in first-half stoppage time.

A fine James Ward-Prowse free-kick dragged the visitors back into it and Southampton should have taken advantage after Jeff Hendrick’s red card and Fabian Schar’s premature departure through injury — which left Newcastle down to nine as they had used all their substitutes.

But Newcastle held on to claim just their second win in 14 attempts in all competitions as they moved 10 points clear of the relegation zone. 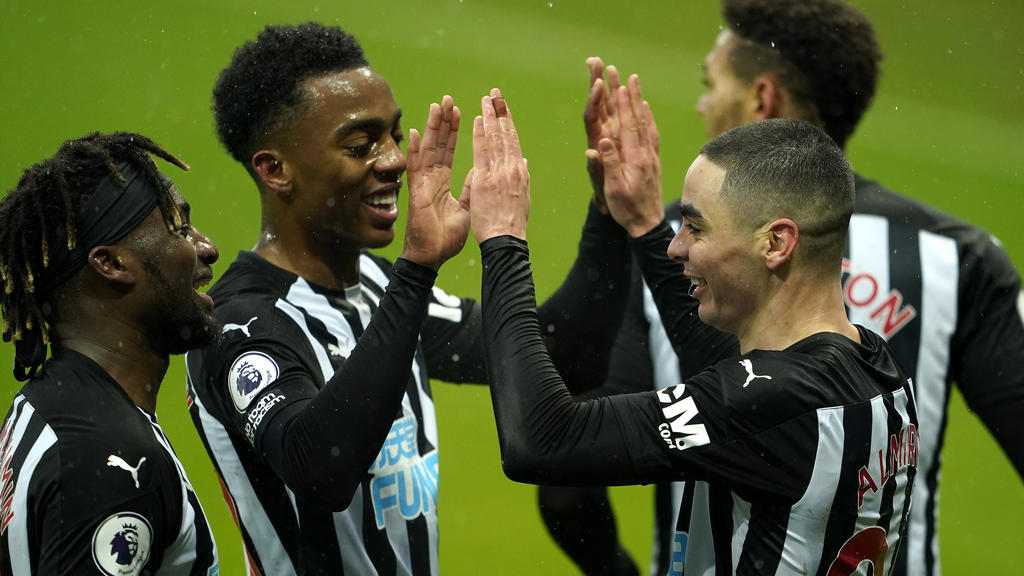